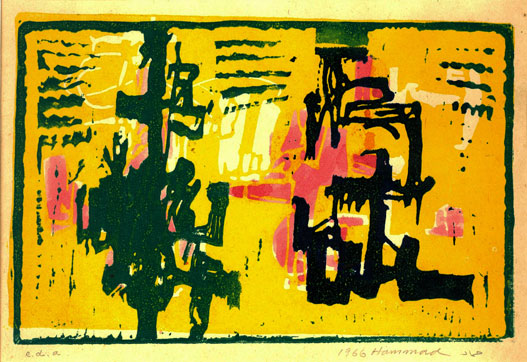 Please join us for launch events in Beirut on April 28 and in New York on May 23 to celebrate the publication of Modern Art in the Arab World: Primary Documents (2018), edited by Anneka Lenssen, Sarah Rogers, and Nada Shabout.

Admission for both events is free, with seating offered on a first-come, first-served basis. RSVP is required for the New York launch.

RSVP for May 23 at The Museum of Modern Art, New York

Both events will bring to life Modern Art in the Arab World: Primary Documents and the book’s diverse content, multiple collaborators, and rich source materials that aim to further the study of modernism in a global frame.

Modern Art in the Arab World: Primary Documents offers an unprecedented resource for the study of modernism: a compendium of critical art writings by 20th-century Arab intellectuals and artists. The selection of texts—many of which appear for the first time in English—includes manifestos, essays, transcripts of roundtable discussions, diary entries, exhibition guest-book comments, and letters. Traversing empires and nation-states, diasporas and speculative cultural and political federations, the documents bring to light the formation of a global modernism that includes debates on originality, public space, spiritualism and art, postcolonial exhibition politics, and Arab nationalism. The sourcebook is framed chronologically, and features contextualizing commentaries and essays to assist readers in navigating its broad geographic and historical scope. A newly commissioned essay by Ussama Makdisi provides a historical overview of the region’s intertwined political and cultural developments during the 20th century.

Zeina Arida is the director of the Nicolas Ibrahim Sursock Museum in Beirut.

Iftikhar Dadi is associate professor in the Department of The History of Art and Visual Studies at Cornell University.

Anneka Lenssen is assistant professor of Global Modern Art in the History of Art Department at the University of California, Berkeley.

Glenn D. Lowry is director of The Museum of Modern Art in New York.

Sarah Rogers is an independent scholar.

Nada Shabout is professor of art history in the College of Visual Arts and Design and the coordinator of the Contemporary Arab and Muslim Cultural Studies Initiative at the University of North Texas.

Special thanks to Sursock Museum and to Zaza Jabre for their support of the launch event in Beirut.