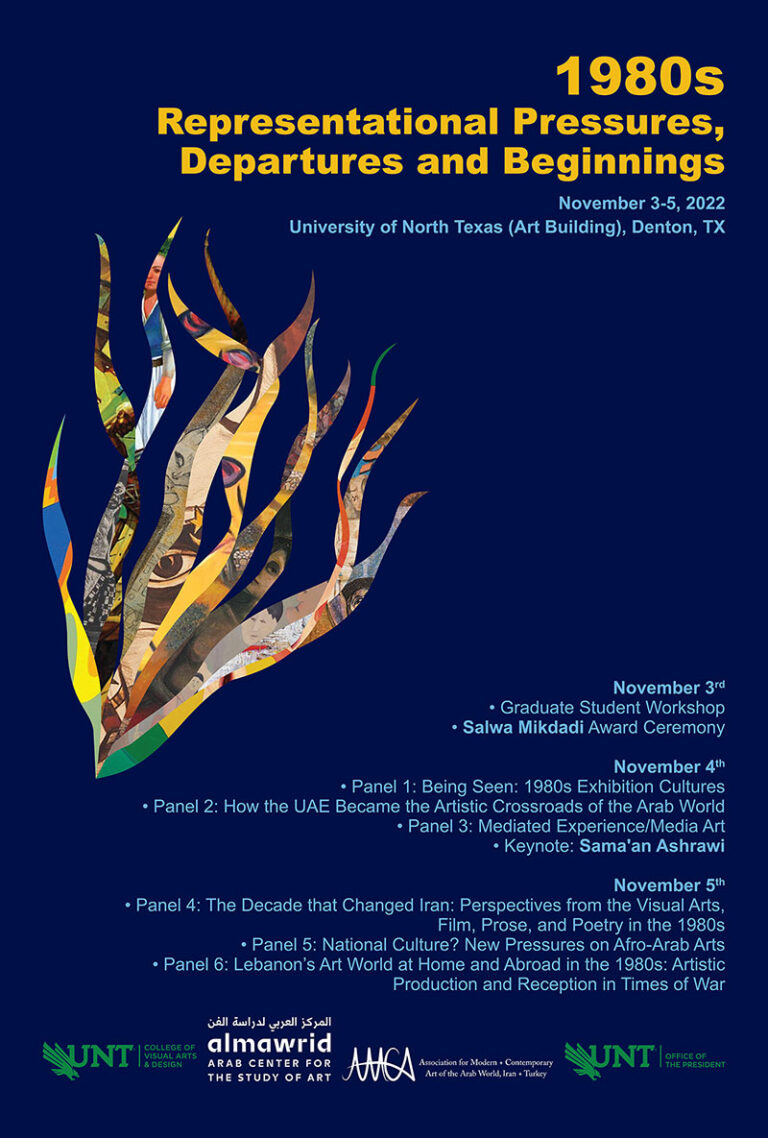 Organizational Sponsors: Office of the President and Department of Art History, University of North Texas; al Mawrid Arab Center for the Study of Art, NYU Abu Dhabi; Association for Modern and Contemporary Art of the Arab World, Iran, and Turkey (AMCA).

The 1980s may have reached a conclusion more than thirty years ago, but the decade’s transformations remain active in artistic practice across the countries and communities of what we now call the SWANA region (including, but not limited to, the Arab East, North Africa, Iran, and Turkey). Thanks to consumer recording technologies, experience and memory took new forms–replay and discontinuous viewing–while cultural criticism began to migrate away from the printed page. To look back on the 1980s is not to be nostalgic so much as to confront the very status of beginnings, departures, and ends. The decade features a list of political crises, invasions, occupations, uprisings, forced displacement, coups, emergent surveillance tactics, militias, and hostages, including the grim events of a catastrophic war between Iraq and Iran, that structure narratives about friendship, solidarity, and loss. And, although the 1980s brought rising enthusiasm for contemporary art as a global phenomenon, artists from the region faced a wave of anti-Middle East sentiment that coded their work as resistant or belated. Still other transitions, such as those associated with economic “opening,” came to manifest as intense attachments to things. We see 1980s-era commodities come to double as talismans for artists: a very specific paper shredder known as the Schleicher Intimus 007S; the certain cut of a leather jacket preferred by Cairo taxi drivers; a textile collage featuring doubled Jesus figure on leopard print; Doc Martens tied to a performer’s ankles in Brixton; a Nowruz variety show distributed only on videotape.[1] For every promotion of an idealized fusion of “tradition” and “contemporaneity” issued by a cultural ministry, there have been artists expressing changeable gendered and classed positions in their projects.

Few histories of modern art from the Arab East, North Africa, Iran, and Turkey have devoted attention to the 1980s apart from marking its transitional status.[2] With this conference, we seek to redress the absence. To borrow from Edward Said writing in 1982, what actual affiliations existed between the world of ideas (or images) and the world of brute politics, corporate and state power, and military force?[3] What are the stakes of specific, situated choices by artists, artist groups, promoters/consumers, or curators and collectors? What strategies are formulated, values mobilized, and expressions codified—by whom, and for whom? How to understand the impact of new initiatives, groups, galleries, and institutions, many established by women? What might we learn from this decade, and, conversely, what of its legacy should be jettisoned for the future?

Events concurrent with the conference will include: 1) ceremony to announce the inaugural Salwa Mikdadi Research Travel Grant launched by AMCA, 2) a funded graduate student workshop convened by AMCA, 3) an exhibition in University of North Texas’s CVAD Galleries, “A banquet for Seaweed: Snapshots from the Arab 1980s,” curated by Nada Shabout with loans from the Barjeel Art Foundation and other private collections.

[2] One exception may be studies of contemporary art in Turkey and their questions around periodization. See the curatorial project of Merve Elveren for SALT, “How did we get here. Turkey in the 1980s.”

3:45-5:30 pm: Mediated Experience / Media Art
-Anna Levett, Oberlin College, “Ibn ‘Arabi in Sausalito: Etel Adnan in the 1980s”
-Hossein Tavazonizadeh, University of Groningen, “Iranian Interiors in the Narrative Cinema of the 1980s: The Construction of the Memory of Pre-1979 Architecture”
-Anneka Lenssen, University of California, Berkeley, “On Hearing / Not Hearing Houria Niati’s No To Torture”
-Dalia Ibraheem, Rutgers University, “Sha’bi Music in Egypt and the Genres Without History”

3:15-5:15 pm: Lebanon’s Art World at Home and Abroad in the 1980s: Artistic production and reception in times of war
Organized by LAWHA at the Orient-Institut Beirut (OIB)
-Monique Bellan, Orient-Institut Beirut, “Continuity and Beginnings? Reading Lebanon’s 1980s art exhibitions through the press”
-Çiğdem İvren, University of Bamberg, “Off the Mainstream: War motifs and the medium of printmaking”
-Jessica Gerschultz, University of Kansas, “When the Wood is Fragrant, the Bond is Stronger”: Tapestry and Lebanon (late 1970s-1980s)”
-Nadia von Maltzahn, Orient-Institut Beirut, “Fadi Barrage: ‘To think things out in painting’”

Open to the Public

Our art historical account of modernism has long been rooted in an idea of dissatisfaction with representation, in a twentieth-century impatience with perceived distance from ‘real’ material, emotion, or knowledge. While Western scholarship privileges one network of European artists with the invention of abstraction in 1910, this dissatisfaction with representation permeated other disciplines as well. Modern architects ceased concerning themselves with historical styles as a métier, instead designing machines for living, and for knowing. By mid century, the methods of postwar sociology and planning shifted in the direction of producing data sets which, offering ways to manipulate experience apart from the singularity of good taste or the frame of the individual, became material to the art object (and its deconstruction) as well. At stake in these multiple abstractions was the dream of true being, as might exist outside the specificity of language or culture.

There is no monopoly on this dream. Nomenclature to describe the transcendence of the singularity of appearances in fact proliferates in translation – the Arabic word tajreed, the Persian entaze’e or the Turkish word soyutlama, and other names – to denote formal states beyond natural likeness such as a lasting structure or eternal concept. And yet, still tethered to the very word abstraction—as it is used in the narrow disciplinary frame of artistic modernism—is a concept of representation that has been formed within the particular historical context of the European tradition of illusionistic painting. Abstraction acquired its sense in reference to a lack, a pulling away from visual representation, an absence of the figure. If this is our disciplinary inheritance, what can be made of work with traditions that never placed emphasis on the icon, or never submitted to the representational limits of the painterly frame? How can we attend to the multiplicity of other artistic problems, or modes of creation, found in modernism writ large? To the many strands of Eastern mysticism and vitalist philosophy that provided an impetus to abstraction, on all shores? What history can we write for the artists who made their own mobility a ground for new abstractions, moving from discipline to discipline, and circulating around various cities and countries?

The fourth AMCA conference seeks to open the concept of abstraction up to inquiry across multiple disciplinary formulations, so as to probe both the frame of modern abstraction and its promise to unframe. Papers might engage a range of subjects, including and not limited to (1) critical accounts of the concept of abstraction; (2) case studies of artistic practice; (3) critical analyses of interactions between artists and architects, or art and calculation; (4) reinterpretations of global conditions for abstract art in the twentieth century. As a whole, the conference is intended to highlight transformations of abstraction in the non-West, including the Arab world, Iran, and Turkey, and the history of aniconic ornament in their spiritual landscapes. Equally it aims to take other impetuses into account: the abstract calculations of colonialism, economics, and planning that produced the modern condition, as well as ethical issues surrounding the abdication of the figure or the non-figure (such as sincerity of practice or lack thereof).

The conference will take place at two institutions: NYU-Abu Dhabi and the Barjeel Art Foundation in Sharjah. By convening the conference in conjunction with a collection of art assembled outside national boundaries, and within a new institution of higher learning located between the Middle East and Asia, in which Europe is de-centered, we anticipate that our discussions in the United Arab Emirates will enable us to un-frame abstraction as an artistic process, goal, and critique. To that end, the conference will conclude with a day of “unconference”, when the questions raised in the conference may be applied to the collection of art in the Barjeel Art Foundation. This collection includes work by Etel Adnan, Mohammed Melehi, Mona Saudi, Hugette Caland, Shakir Hassan Al Said, Omar El Nagdi, and others may be viewed at  https://www.google.com/culturalinstitute/u/0/collection/barjeel-art-foundation.

All proposals to be submitted by Oct 31st 2015
to: info@amcainternational.org. Responses will be emailed on December 1st, 2015.

The conference will focus on two primary issues:

Third Annual Conference of the Association for Modern and Contemporary Art of the Arab World, Turkey and Iran
October 18-19, 2013
Kevorkian Center, NYU” 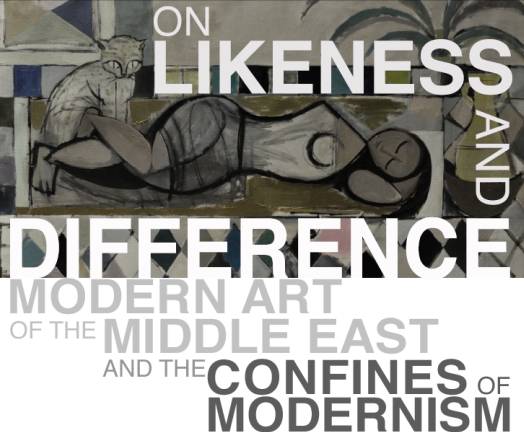 Writing the History of Art outside Art History

The Construction of Difference

Cosmopolitanism and the Roots of Moroccan Modernism
Holiday Powers, Cornell University Architecture after Independence: Decolonization, Modernity and the
Search for Selfhood in Housing Projects of Tunisia, 1956-1970
Nancy Demerdash, Princeton University

The Problem of the Modern in Iran

Issues of Plagiarism and Authenticity in Early Modern Art of Iran:
‘Judgment for the Public’ as Visual Art Criticism
Hengameh Fouladvand, Center for Iranian Modern Arts

‘Iranian or Not?’ That Indeed Might Not Be the Question
Talinn Grigor, Brandeis University
Discussant: Pamela Karimi, UMass, Dartmouth

Similarity and Difference: the Case of Cubism

By Ceren Ozpinar (*)
*Participation support for the conference with Ceren Özpınar is generously provided by SAHA Association.www.saha.org.tr

This, our first AMCA conference, brought together established and emerging scholars working throughout the world to present research and think through the intellectual problems shaping the field of modern Arab art today. It was hosted in collaboration with Mathaf: Arab Museum of Modern Art in Doha, Qatar and took place in conjunction with the museum’s inaugural events and exhibition openings.