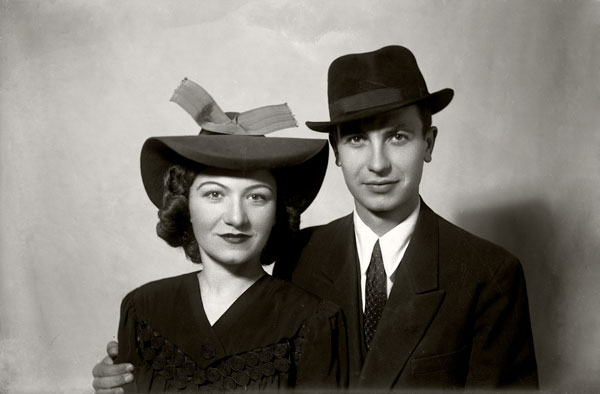 Many Ottoman photographers of Armenian heritage who operated studios in the Pera neighborhood of Istanbul, such as Abdullah Frères and Pascal Sebah, are well recognized in the history of Orientalist photography. But less is known about Armenian-Turkish portrait photographers who endured political hardship during the early Turkish Republic to continue operating their studios. Contemporary artist Tayfun Serttaş, who has training as a social anthropologist, has taken on the role of a social historian to call attention to some of these practitioners. Stüdyo Osep, his first large-scale archival project, grew out of his family’s ties to Osep Minasoğlu, a Turkish-Armenian photographer who operated studios in Istanbul from the 1950s through the 1980s. Serttaş worked with Osep to compile a book of images with the same title, published by Aras in 2009. This collaboration led to Foto Galatasaray: Studio Practice by Maryam Şahinyan, a publication chroniclingthe life work of portrait photographer Maryam Şahinyan. Şahinyan opened Foto Galatasaray in 1935 and operated it until the 1980s. After her death in 1996, Serttaş was given care of more than 200,000 of Şahinyan’s images salvaged by Aras. The artist continues to spearhead this mammoth conservation project with the support of the art institution SALT Galata, which hosted an exhibition of these photographs from November 2011 to January 2012, many images showcased in digital form. Because the delicate condition of the existing negatives prevents them from continual public access and display, the book Foto Galatasaray provides the only access to a significant selection of this archive that is presently available.

With the exception of two short introductory texts by SALT director Vasıf Kortun and fiction writer Karin Karakaşlı, the book’s other texts are all written by Serttaş. What results is a highly personal dialogue between the absent Şahinyan, speaking through the images she produced, and the photographer-archivist Serttaş who injects a broader contextual meaning into these images through his methods of organization and display. Serttaş refers to the discoveries he makes in Şahinyan’s archive as anti-memory. He writes, “it reminds us that what we can remember is not limited to what our memory conditioned us to remember, it becomes anti-memory. It becomes the form of the past and making peace ‘despite the past.’ It convinces us that there is another ‘we’”.

The first chapter recounts Şahinyan’s family history and the historical conditions and political realities that led her to become a portrait photographer, including the ethnic cleansing of Armenians before and during the First World War, which uprooted her family from their home town of Sivas and stripped her father of his government post. Şahinyan’s Armenian background and the fact that she was an observant member of a religious minority helped her attract members of Istanbul’s Armenian population, as well as making her studio popular with members of the city’s other minority communities. As a result, Şahinyan’s life work also serves to document the diversity of Istanbul’s social fabric over the course of these years, and offers a testament to the Turkish-Armenian community’s endurance, rootedness, and survival. It also leads the viewer to consider the factors that altered this social fabric. Some of the related incidents mentioned in the book include the passing of a tax law in 1942 meant to penalize non-ethnic Turks and the anti-minority pogroms that swept Istanbul in September 1955. 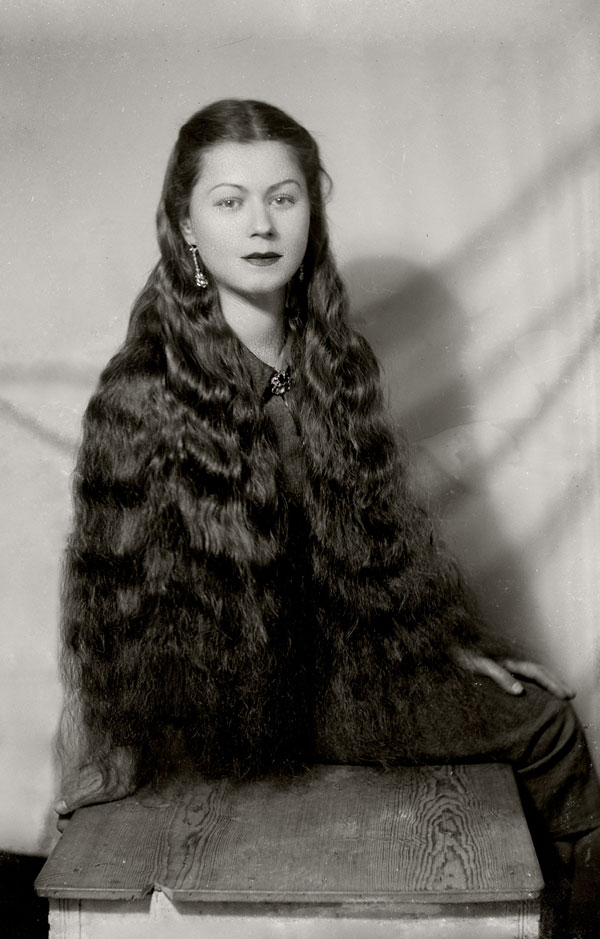 Şahinyan’s more visible identity marker, that of being the only woman commercial photographer in Istanbul, had perhaps the most significant effect on the clientele she attracted. There are more pictures of women and children than men in Şahinyan’s archive. The female subjects appear to metaphorically let down their guard (sometimes stripping down to their undergarments) and literally let down their hair. In a particularly iconic image which graces the book’s cover, a beautiful young woman with the slight glimmer of a smile entwines her hands under her lace collar while leaning on a platform covered with a piece of canvas. Her plentiful, wavy hair has been parted down the middle to extend in two segments down over her shoulders and spill onto the platform so as to resemble the outline of angels’ wings. In another portrait, a woman is seen from the back, her face in profile, her rich brown mane looking as though it has just been unleashed from a braid and is slowly expanding to take over the entire composition. The archive documents the important changes undergoing the representation of women in modernizing Turkey. It also offers a significant break with the uneven power dynamic between the male voyeur and the female subject that was all-too-often prevalent in the Orientalist photography coming out of this region.

The second chapter, titled “Open Readings,” outlines Serttaş’s practice of grouping images in the archive according to his chosen themes. This chapter is organized into subsections that illustrate such themes, including “Reflections of Fashion,” “Gender” and “Migration and Transformation.” Serttaş’s educational background in social anthropology is reflected in the way he uses these images to narrate a social history of Istanbul that reflects changes in Turkey’s political history. In “Reflections of Fashion,” we see Mustafa Kemal Atatürk’s sartorial reforms, intended to modernize and Westernize the new Turkish Republic, reflected in the fashionable hair styles, hats, dresses and mink stoles worn by Şahinyan’s clientele in the 1930s and 1940s. Some of the women aspire to the likenesses of fashion icons such as Ava Gardner or Katherine Hepburn, indicating the global reach of Hollywood’s ideals of beauty.

The section titled “Migration and Transformation” focuses on the influx of rural populations into Istanbul in the 1980s. Processes of industrialization, globalization and neo-liberal economic practices continue to trigger this city’s growth today, so that its population now numbers close to 15 million people. Şahinyan was witness to this demographic shift in the 1980s. The new urban transplants she photographed during these years were rural Armenians who had recently migrated to Istanbul. In these photographs we see that women are clothed in more traditional and modest fashions exemplary of village life. Cotton print dresses, the şalvar (baggy trousers) and the tülbent (a head scarf made of printed fine muslin, decorated with embroidery) have replaced the snappy mink stoles and the jaunty hats of earlier, more cosmopolitan Istanbulites. The extended families of these new urban residents are also larger, sometimes including three different generations in one photograph. These subjects illustrate how Istanbul grew to become a microcosm of Anatolia itself, thereby also lending visual expression to a greater diversity of region, income and class.

In the section titled “Gender,” Serttaş’s methodology starts to resemble the practice of Lebanese artist Akram Zaatari who has mined the historical archive of Lebanese commercial photographer Hashem el Madani to produce narratives of difference that make an appeal for greater social tolerance in the Middle East. In photographs by Şahinyan that appear to date from the 1940s and 1950s, we see transvestites posing for her camera, and men in makeup, their long nails manicured by her rudimentary photo retouching techniques. One image shows two men in suits with their arms around each other, leaning in for a kiss. Another shows two women gazing longingly into one another’s eyes. Are these playful charades enacted in front of the camera, or are they meant to serve as extremely personal expressions of sexual preference and queer identity? This is where is archive serves as a particularly fertile space for drawing out open-ended meanings and thereby helping produce a greater variety of subject positions that Istanbulites can identity with, even from a historical remove. 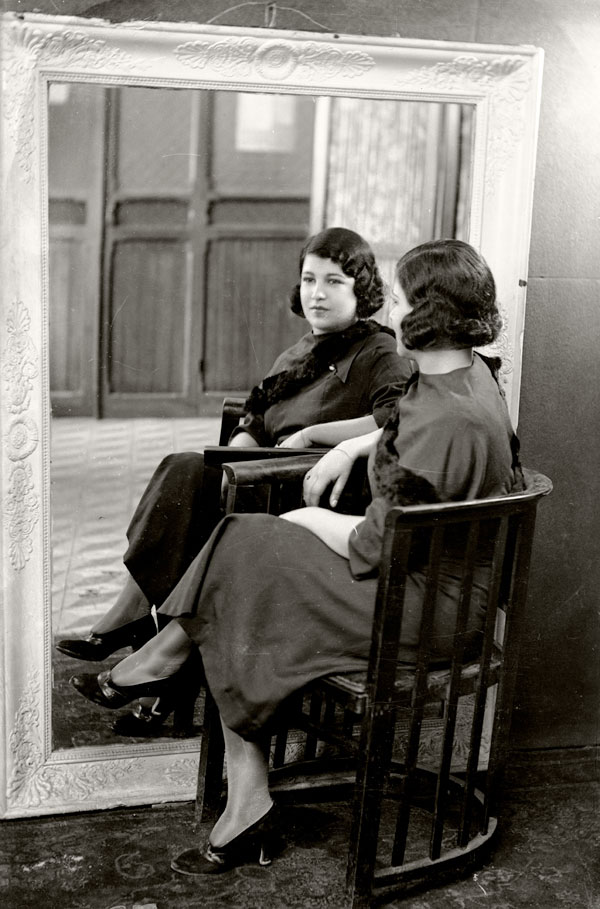 The last portion of the book places Şahinyan’s images into two “albums,” titled “Identicals” and “Those Who Stare Through the Mirror.” These headings are informed by Şahinyan’s praxis, the ways she would pose her clientele and the structural patterns that regularly reappeared in her photographs. In “Identicals” we see children, as well as adults, dressed as doubles, wearing either identical or extremely similar outfits. In the other album, the gazes of the models posing in front of the mirror are reflected back at the camera, so that both a profile view and a full facial view of the same person coexist in one image. These albums explore important themes such as the tension between individual subjectivity and social belonging. The richness of the level of meaning embedded in this material also holds the potential of offering the greatest number of psychoanalytic reads. For example, Freud’s concept of the “uncanny,” or Judith Butler’s notions of performed identity and gender could be examined further here. As such, these two albums would have posed a good opportunity for Serttaş to further expose the depth of meaning embedded in an archive by inviting a greater number of artists or writers to lend their personal interpretations to these images.

As a sizeable volume that samples an extensive archive, Foto Galatasaray uses portraits to illustrate the social impact of historical developments in the life of a young republic. Şahinyan’s portraits reveal how individual subjects may have subsumed state ideology and cultural norms to integrate them into their individualized identities, as well as showing us that the act of actively performing identities for the camera sometimes produced variants on these norms to enable a greater possibility of subject positions. It also shows how the shifting demographics of Istanbul in the 1980s played a significant role in the emergence of identity politics in Turkey in the 1990s, charting how the more homogenous Kemalist ideal of Westernized modernity in the earlier 20th century transitioned into one that had the potential to account for ethnic, religious and class differences in later decades. Where the book may fall short is in fully exploring the depth of meaning embedded in such an abundant archive. Opening the archive up to different readers, even those who may not have had cultural ties to Istanbul, may have produced a greater diversity of interpretations, perhaps maybe enabling it to exist beyond its national framework to enter into more transnational dialogs about migration and belonging. Perhaps that is the task of a second volume on Foto Galatasaray, one that can be published once this archive is able to find a permanent home.